The Hong Kong Signal Company and the SS Lisbon Maru

In memory of the officers and men of the Corps who died during the sinking of the SS Lisbon Maru on 2 October 1942, and of those others who were killed in action during the Battle for Hong Kong or who later died as prisoners of war.

Before dawn on 1 October 1942 off the small islands at the eastern extremity of the Zhoushan archipelago near Shanghai, Lieutenant Commander Rob Roy MacGregor, United States Navy, commanding the submarine USS Grouper, spotted a perfect target—a Japanese freighter of about 7,000 tons. Having delayed his attack until just after daylight, MacGregor fired a first salvo of three torpedoes; all missed. A fourth hit the freighter’s stern and she hove to. Sometime later, seeing that she was not sinking, MacGregor fired a fifth torpedo and then a sixth, which also missed. Grouper had now been spotted, however, and under attack she made a run for safety.[2]

The freighter was the SS Lisbon Maru, a 22-year-old general cargo ship converted to carry a human cargo. On board were 1,834 prisoners of war from Hong Kong and 780 Japanese soldiers.

Japan had attacked Hong Kong on 8 December 1941. After 17 days of hard fighting the garrison surrendered on Christmas Day—for the first time, a British colony had been captured and a little under 11,000 men went into captivity on or near the island. Early in 1942, the Japanese reorganised the prisoners, with those of the British Army being imprisoned in Sham Shui Po Barracks in Kowloon. Officers were moved to Argyle Street Camp, also in Kowloon, in April 1942, along with some men to act as cooks and batmen. Amongst the prisoners in Sham Shui Po were the men of the Hong Kong Signal Company.

When the battle began, the Company numbered seven officers and 178 other ranks. Its efforts during the battle, which were highly praised, were greatly added to by a section from the Royal Canadian Corps of Signals, numbering 33 all ranks, which supported ‘C’ Force, the Canadian contingent. Additionally, support was provided by the signallers of the locally raised Hong Kong Volunteer Defence Force Fortress Signal Company and Hong Kong Volunteer Defence Force Signals. The diary compiled by the Chief Signals Officer, Lieutenant Colonel Eustace Levett, describes in detail the work done by the Company during the fighting and it is clear that it contributed materially to the battle. For their services during the defence of Hong Kong Lieutenant Colonel Levett would be awarded the OBE, Lieutenant Spong earned an MBE, Sergeant Charles Page and Corporal James Stott were awarded the Military Medal and Signalman Colin Hodgson was mentioned in despatches. For details on the men of the Company and the other signal units, and all the awards earned and citations see the roll below.

Needing labour to support the war economy at home, the Japanese planned to move prisoners from Hong Kong to Japan in the summer of 1942. The first transportation of 620 men left on board the SS Shi Maru on 4 September. The second transportation was scheduled for the end of the month.

In late September 1942, 1,834 men were moved to the docks to board the freighter Lisbon Maru; this contingent included three officers and 126 other ranks from the Hong Kong Signal Company. On 26 September, 780 Japanese soldiers, including some wounded men, boarded the ship and she sailed the next day. Conditions on board for the prisoners were grim—the holds were cramped, the air was hot and foul, food was minimal, and diseased men went untreated. Diptheria broke out after a few days at sea and the few medical supplies available soon ran out. Hugging the coast, the ship sailed north until on 1 October it was in the East China Sea about 20 miles off the Zhoushan archipelago.

On the evening after it had been hit while under tow to shallower water, the ship began to list and a Japanese destroyer and another cargo ship took off most of the Japanese soldiers and crew. The hatches to the holds had been battened down and the prisoners were left to their fate as the Lisbon Maru settled by the stern. The following morning the ship listed further and men began to break out of the hold, only to be confronted by guards willing to shoot them down. The guards were soon overpowered and the men took to the sea. Land could be seen in the distance—the Dongji Islands—and those that could struck out, taking hours to swim the four miles or so to land. Some were picked up by Chinese fishing boats that had set out from the islands several miles away. Later in the day some men were picked up by Japanese boats.

It was on 2 October that Signalman Topliff, who had managed to swim to the islands, acted most bravely. The currents along the islands’ weather shores were strong and the waves battered the shoreline with considerable force. Topliff saw that another survivor was unable to reach shore and was being taken out to sea by a change in the current. Although exhausted, and at considerable risk, he went back into the water and rescued an officer of the Middlesex Regiment, Captain Christopher Man.[3]

Eight hundred and twenty-eight men died when the Lisbon Maru sank or in trying to swim to safety or were murdered in the water by the Japanese. One officer and 49 Royal Signals soldiers died, among them were Sergeant Page and Corporal Stott, who would never hear that they had been rewarded for their gallantry during the battle; all are commemorated on the Sai Wan Memorial in Hong Kong.

The survivors from the Lisbon Maru were taken by the Japanese to Shanghai before sailing again for Japan and captivity. Forty-four men, those too sick to be moved and men detailed to look after them, were left behind in Shanghai. Sixteen of these men died, including two soldiers of the Corps—Corporal Joseph Watts and Signalman William Newbold, whose ashes were buried in Woosung (Wusong) Cemetery; they were reinterred in Yokohama War Cemetery in 1946.

Seventy-nine survivors from the Signal Company finally arrived in Japan and went to work in Osaka as stevedores in the port; most remained there, although some were moved to other camps in the region. A further 23 men were brought to Japan on other transports. Sadly 17 men did not see the end of the war; their ashes are interred in Yokohama War Cemetery. Two others died in an air crash after their release in 1945.

The Hong Kong Signal Company had suffered grievously—93 men, more than half, were killed in action, died of wounds or died in captivity.

Arnold Topliff BEM survived his incarceration in Japan; he died in Derbyshire in 1969, aged 50. 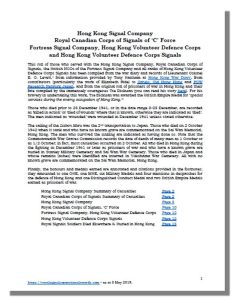 The Roll above (which opens as a pdf document) records all who served with the various signal units in Hong Kong, the fate of the prisoners and the citations for those rewarded for their conduct.

Somewhat surprisingly, given his comprehensive coverage of almost every other aspect of the history of Royal Signals during the war, Major General Nalder confines his comments about the Battle for Hong Kong to a very short paragraph that does not even mention the Hong Kong Signal Company. Those that wish to read more about the battle, the Corps’ contribution and the fate of the prisoners, must look elsewhere. (See the update to this blog post here.)

The most important source of information about the battle and the fate of the prisoners is the series of three books by Tony Banham. His website Hong Kong War Diary has details of these and a huge amount of additional information. A large amount of information has been amassed on the website of Gwulo: Old Hong Hong, including the original POW records compiled by Tse Dickuan BEM, part of the Elizabeth Ride Collection.

An extensive research database may be found at the charity COFEPOW.

For information about prisoners of war in Japan and the camps in which they were incarcerated see: Center For Research Allied POWS Under The Japanese.

Details of the prisoners taken to Japan may be found at the POW Research Network Japan.

The Chief Signals Officer, Lieutenant Colonel E O Eustace OBE, compiled a detailed war and captivity diary, which is now held by the Royal Signals Museum (a copy may be found in the Imperial War Museum). Some parts of it and the story of Sergeant Albert Ient Royal Signals, who survived the Lisbon Maru sinking, may be found on The Ient Family website.

1. (Back) London Gazette 15 March 1946. 37500, p 1372.
2. (Back) USS Grouper (SS-214), was a Gato-class submarine armed with Mark 14 torpedoes. This was Grouper’s second war patrol and MacGregor’s first. For this patrol, he was awarded the Silver Star Medal on 13 May 1943. Two more Silver Stars followed in March 1945, the first for another war patrol in USS Grouper, and the second for his command of USS Sea Cat (SS-399).
3. (Back) Captain Christopher Mark Morrice Man, The Middlesex Regiment (Duke of Cambridge’s Own). Man survived captivity and in 1946 was awarded the Military Cross for his gallantry during the defence of Hong Kong. Later Major General C M M Man CB, OBE, MC. He attended the eleventh reunion of the Hong Kong Signal Company, held at Blandford in 1979, and recounted the story of his rescue.